Noé on the road of Indonesia... Keramas!

It's March 2014, during my trip around the world to the well known island of Bali. A dream surfing destination for many surfers where there are incredible tubular waves. A fairly large swell was due to arrive on the coast of the island, the forecast indicated 7 feet and 22 seconds of period. 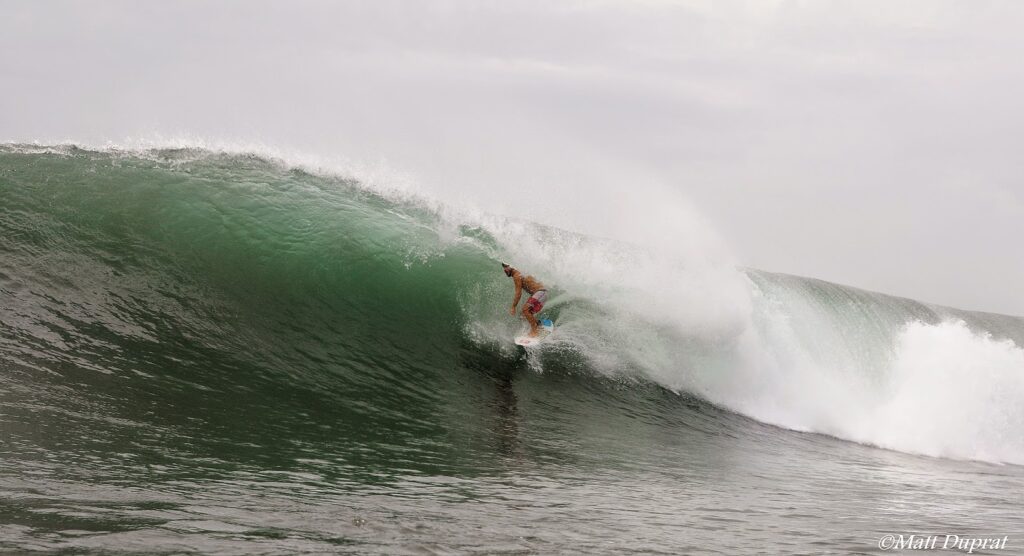 During my stay in Indonesia, I stayed with Arno, a French expatriate who has been living there for a long time.

We quickly decided to choose this spot, and in the early morning (4.30am) we put our boards on the scooter and drove to Keramas. When we arrived in the morning, there were already a few people in the water. I can still see Mush telling me: "I love this wave but we're going to eat".

It was crazy! The ocean was as flat as a lake, a light offshore wind was blowing, leaving the water incredibly clean! Just enough time to settle down for a minute, and the first set since our arrival could be seen in the distance. Three lines, quickly heading towards the line-up, were swelling.

All the surfers were paddling back and forth to get into position or to escape. The first wave arrived and rose very quickly. It was perfect! The lip threw forward, a surfer took off on it and went into the tube. You could see the wave breaking, steady and loud, until you saw a big blast of air coming out of the tube, and then the surfer with his arm outstretched; he was none other than Artiz Aranburu, professional surfer.

On this day, there were some great people in the water with Aritz Aranburu and his fellow pro surfer Tiago Pires. The day before, Mick Fanning had come to surf Keramas. The meeting was set, it was the place to be! The atmosphere in the water was very respectful, but there was silence when the heats were going on. You could feel everyone's humility take over as the barrels came through to clean the line-up. It was sometimes scary, sometimes just impressive to see these pro surfers riding these waves so closely with such ease. It wasn't very big surf, but the size was enough to change our behaviour in the water.

It's mentally that the difference is made at this moment! A bad wave, a bad start and it could already hurt enough. The Keramas tube, when the spot is in action like this is magnificent, very hollow, deep and the wave goes very fast. If you get the right wave, it won't close. Just a huge bowl will open up and swell in front of you and you can get out of the water and say ok, now I've surfed a wave from Bali!

Keramas isn't like this every day, but it's also one of the best waves on the island and hosted the world tour for a year. The place is beautiful with this grey sand! I will never forget this day in Keramas, a wave that our friend Mush loves to photograph!

Thanks to him! It's not every day that you can have such photographs!